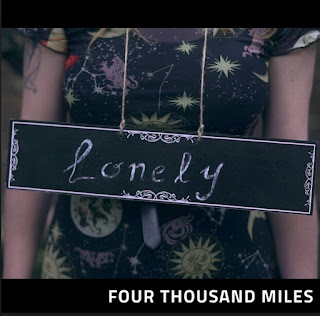 So rewind a month and I got a DM off a band that I actually replied to, I know me replying to messages, shocking. But I was intrigued because they're a band with four thousand miles between them, there's 2 members from the UK, one from England and one from Wales, there's one from France and then another from America! Which is obviously quite interesting because that's something that you don't see often. So of course, I had to offer them a review! And I am so thankful they accepted the offer because I'm blown away!

So, Four Thousand Miles are an international rock band who released their first single on Friday (14th February) and like I always do, I stayed up until midnight to listen to it and I was blown away!

It's catchy, very catchy. I mean I was sending it to most of the people I was talking to and making them listen to it, that's when you know I love a song a lot.

Some lines hit me in places I forgot lyrics could hit me, it's such a beautiful, well thought out and perfected song. To say this is their debut single, you wouldn't believe it because of how mature and fine-tuned it is. It's the song I've had stuck on repeat since it came out, I don't think I've listened to much else, because all weekend I've had Lonely stuck in my head. But it's one of those songs that I'm happy to have stuck in my head. The song does remind me of another rock band that I like, but I cannot for the life of me remember who it is. But I would say if you like, Don Broco, Lower Than Atlantic, Deaf Havana and Best of Enemies than you are probably going to really dig this sound.

They did say that they were going to be releasing a song every month, and if that happens, I am more than happy to continue reviewing their tracks, because if Lonely is possibly my favourite song that's been released so far this year.

From the way, the chorus rings out to the way that Alex's voice compliments the track perfectly. It is a perfect song in my opinion, so don't sleep on Four Thousand Miles, go show both the band and the track some love and play it on repeat! But I do think we might have a new God tier band on here if this track is anything to go off, so I'll be making sure I keep an eye out for their future releases, and if they are willing to let me do more posts on them, then I'm 100% in!

Overall we're going to give Lonely a solid 5 out of 5 lemons! 100% cannot fault the song in any way, so go listen to it!


Where to Find Four Thousand Miles


Where to find me;
Here Every Monday at 7 pm UK time
Twitter @MyVoiceBrxndNewInstagram (myvoicebrandnew)
My second blog!
My Beauty Blog
Buy My Novel
My YouTube Channel
If you wish to have a post done on a band then please contact me at
myvoicebrandnew@hotmail.com