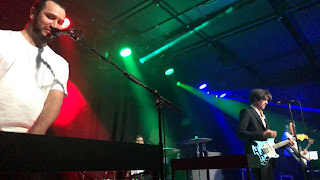 Last week Notts welcomed Twin Atlantic back into the city. It'd been a while since Twin Atlantic had been in Nottingham, and to be in such a small capacity venue (similar to the likes of Rescue Rooms capacity wise) and for them to be doing a signing afterwards was great to see. The set was only 45 minutes long and to say that Sam and Ross were unwell at the time you wouldn't have thought so. They pushed on and got through the set and were still up for meeting fans after the show.

The setlist consisted of;

No Sleep
Make A Beast Of Myself

The set was short and sweet and it was a good variety if you think that they've just released a new album there were 4 songs from POWER, one from Free, one from GLA and two from Great Divide. It was a great show with a lot of energy and to say that I don't see bigger bands that often anymore, it was so refreshing to see my favourite band in a small capacity venue. It made me pretty excited for the March tour next month, and it's less than 6 weeks until I see them again and it's honestly great. It was one of the best gigs I've been to, and I'm not only saying that because I got to meet them and got Barry's setlist, I'm saying that because I haven't seen a band that compares to Twin Atlantic live. It also made me fall back in love with them all over again because honestly, WHAT A BAND!

It was hands down a 6 out of 5 lemons show. Without a doubt. No hesitation.

You can catch Twin Atlantic on their March headline tour, you can also find all their music on all the usual platforms.