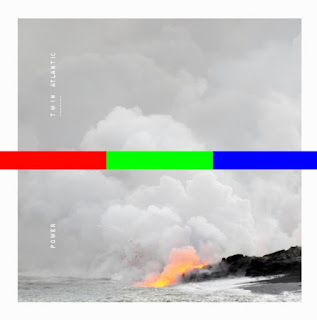 It's no news that I adore Twin Atlantic, so we all knew this post was coming. It would have been up yesterday but I was actually at their album release show in Notts (a review of that will be up next Monday).

Twin Atlantic is known for changing up their sound and not sticking to genre norms. They’re known for pushing the boundaries of rock and expressing creativity within their albums. There was the grungy feel of Vivarium and GLA, the classic feel of Free and the pop feel of Great Divide. Their new album Power is no exception to this rule. With this album, they’ve experimented even further and pushed those limits to a new level. Power has an exciting electro-thrill about it whilst still sounding like classic Twin Atlantic. It’s not an album that feels like it was a safe choice. It sounds like a risky move that maybe not everybody will be on board with, but it could also bring in a lot more people because of the sound and feel of the album.


The album opens with Oh! Euphoria! which sounds completely different to their previous album-opening tracks, however, it still sounds like Twin Atlantic it's not a song that people think doesn't sound like them. We then transition into Barcelona, which I feel is the Power equivalent of The Chaser (GLA). It's upbeat, it's catchy. It makes you wanna dance and scream. It's a solid track. And it really is a great track! It's one of my favourites from the album and it sounds like Twin Atlantic and I know some people were worried about the change of sound with this album, but Barcelona isn't a song to worry about. The next track is Novocaine which reminds me of No Sleep (GLA) it's got that slightly darker sound, it's upbeat, it's fast, it's intense. It's a song that hits the spot and you wouldn't be able to tell that this was from Power, because it just blends in with Twin's sound perfectly.

The next track is Mount Bungo which is actually an interlude. There are two interludes on the album and as interludes go they're great. It does give it a different sort of vibe with the album, but it's not like it's something Twin Atlantic haven't done before so I wouldn't really be too worried about this. After the interlude, we transition into I Feel It Too and it blends in seamlessly from Mount Bungo, this track does, however, have more of an electric feel about it. But it isn't as if they ditched actual instruments, because it still has the drums and bass featuring heavily. Then comes Ultraviolet Truth, which for me I would say is one of a couple of songs that have the evolved, electric sound. But it still sounds like Twin Atlantic, and it has some beautiful lyrics to accompany it. Then we have another interlude but this one is just over 2 minutes long whereas the other one is just over 40 seconds long. Then we transition into my favourite track off of the album which is Volcano, which I can only compare to Gold Elephant::Cherry Alligator and No Sleep, it's like a combination of them both, but it's got the catchiness of The Chaser. It's also great to hear live and honestly cannot recommend this song more. it's perfect. Then comes Messiah which doesn't fit what a lot of people know and associate as Twin Atlantic but it still sounds good, because it's still got that little twist of Twin magic on it. It's almost like a slower version of Gold Elephant::Cherry Alligator, and I can't complain about the song because it's executed well, and it sounds good.

The album concludes with Praise Me, which does sound good when you consider that the album opens with Oh! Euphoria! the two work well as opening and closing tracks, and again, it's catchy, and powerful whilst still having a bit of a Twin Atlantic twist on it.

Overall I'd give the album a solid 4 out fo 5 lemons, because if you look at the tracks individually and you view it as an album and not a Twin Atlantic album it's a great album, it's well thought out, it's unique whilst not being insane. It's an album I don't think many bands comparable to Twin Atlantic could execute the way that they have.


Where to find me;
Here Every Monday at 7 pm UK time
Twitter @MyVoiceBrxndNewInstagram (myvoicebrandnew)
My second blog!
My Beauty Blog
Buy My Novel
My YouTube Channel
If you wish to have a post done on a band then please contact me at
myvoicebrandnew@hotmail.com