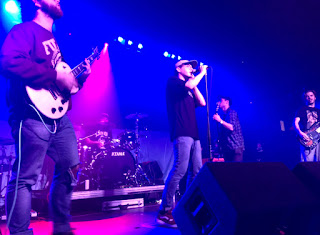 Belmont was the first on, opened with Hollowed Out, lost my voice for the rest of the set. They were good, but I did think that the sound was off, for the pure fact that it was the same for Real Friends and Grayscale, so Rescue Rooms, less drums more vocals please. The mix was off, however, besides that, they were actually pretty good! Absolute adored them! I got to hear Pushing Daises and Hollowed Out live so I can't complain. They were good, they had a hell of a lot of energy, more energy than I ever have. And I actually really enjoyed seeing them, it was one of them things that I wanted to see them live, and now I have can tick it off my list sort of thing.

They did put on a good show and they were bloody good at warming up the crowd, cause the pit definitely got going. My heart is happy. 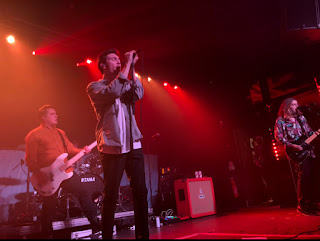 Next up was Grayscale, and this was when I realised the problem was with the sound rather than the band. They were good, I do quite like Grayscale, for me personally I was more excited about Real Friends because Real Friends were one of the first pop-punk bands I got into. But Grayscale were good, they really got the crowd going, and who doesn't wanna scream "I loved a girl named Maddison and she liked to do heroin" and the fact we were at barrier made it even better. Grayscale were quite good live, it's another one I can tick off my list, because I got to hear Atlantic which is my favourite Grayscale song.

The pit was getting intense during Grayscales set so I'm not going to complain. 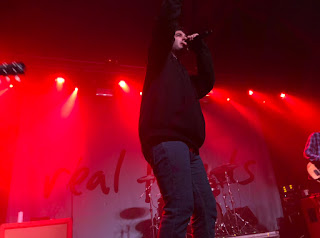 Real Friends, YES. What a set. Take a shot every time Dan came over to us and took his in-ears out and I got to scream at him! But the eye contact got a little intense. You know when you know someone's looking at you and you lock eyes and it's intense, was like that during Mess, so fun times. It gave me a whole new level of love for Real Friends. Honestly, what a band. The speech Dan did before Unconditional Love nearly made me cry and the same with Me First. Honestly, what a band. Real Friends are insane, and I want to see them again because SO. GOOD. Honestly loved em, going to put them on par with Deaf Havana when it comes to performance, because wow. Next level.